YACL - Yet Another Contest Logger

YACL - Yet Another Contest Logger

YET ANOTHER CONTEST LOGGER

Withe the passing of Mike VK3AVV in January 2022, the future of VKCL (VK Contest Logger) was placed in doubt.  The following was on the WIA News of 29 April 2022 :

"Also this year we lost another friend and colleague Mike VK3AVV. Mike was the creator of the VK contest logger software (VKCL). VKCL is a terrific contest logging programme which we had recommended for entry into the Harry Angel. One of its major features is that, at the end of the contest, the programme itself could e-mail your log entry directly to a WIA Contest Portal and that was then all done and dusted. Since Mikes passing the future and ongoing support for the VKCL software is unclear as is the availability of the Contest Portal at this time. "

Then "  By now, I expect that most VHF-UHF contesters will have already heard that Mike VK3AVV, developer of the popular V-K-C-L logging program, passed away in January after a long battle with cancer. Listeners will recall that I published a Silent Key obituary in the current issue of Amateur Radio magazine, written by Mikes friend, Peter Forbes VK3 Quebec India.

Following the sad news of Mikes passing, I made contact with his son to enquire about arrangements to get access to the log-checking software. I have recently heard back from him. The situation is that VKCL and Mike's log-checking software cannot be accessed until after probate on his will is determined as all his computer equipment and software is part of his estate. I will hear from his son in due course.

In the meantime, after discussions with a few colleagues, I am arranging to compile and publish a table of log results as-lodged, perhaps with a minimal course of sample checking. This will all have to be manual. Fortunately, all logs are in a standard electronic format. Keep a watch on the WIA VHF-UHF Contests web page.  "

Mike's passing had a little to do with my starting YACL, but I started the project some weeks before the above words were published, and just after a VK-based Digital Sprint event on 9th March 2022  to evaluate the EU VHF Contest configuration in WSJT-X software, and to test my Dig_Link and Dig_Log software.   The logs that I got back afterward were a literal dog's breakfast in format and details. That was my trigger since even VKCL's log did NOT comply properly with Cabrillo V3.0 format despite supposedly doing so.

My early project working name was 'ContLog' (/Cont(est) Log(ger) ) but I subsequently found that a German web site had a contest logging package already using that name.  So what I had started was "Yet Another Contest Logger", to add to the multitude already available..  My development environment is Delphi version 7, 20-odd years old, but it has the advantage of producing a single EXE file encompassing most user libraries and NOT requiring DotNET support in the operating system. That means that my application will run on 32-bit and 64-bit versions of Windows from XP to Win10/11.   Likewise, I am aware that many older PCs and laptops have monitors that support only 1024x768 pixel resolution so the on-screen size has been limited to fit. 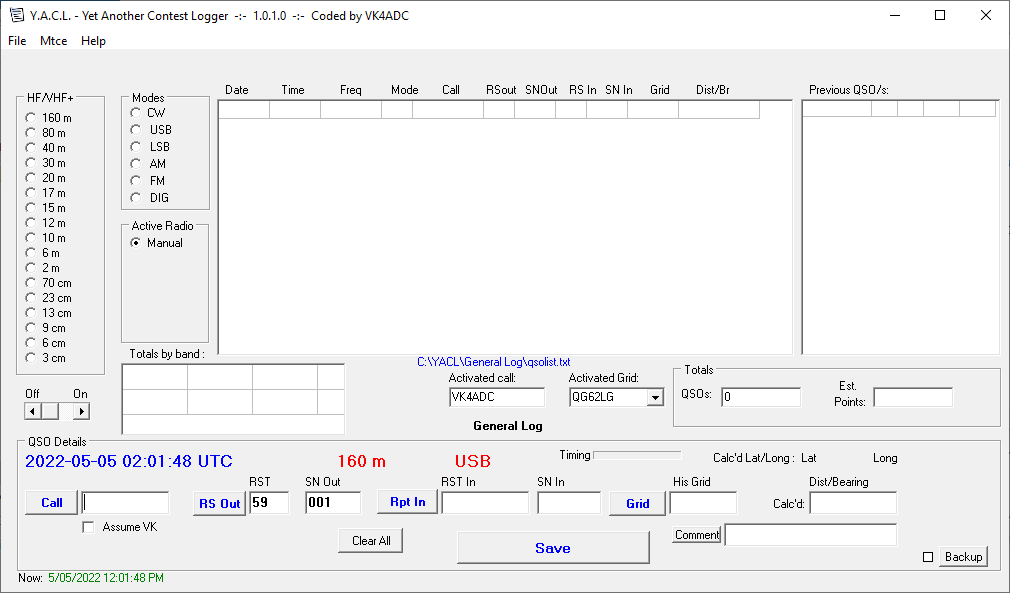 This is an early version image of YACL, and many will note at least a fair similarity to VKCL - and that is definitely on purpose.  The earliest versions were considerably different from the above layout but things were subsequently moved around to at least partially emulate VKCL from a user's view.   Eagle-eyes will note that it starts in "General Log" mode until a contest is configured, and afterwards it starts with that contest already showing.

It supports OmniRig V1 so that two radios can be used for sources of frequency and mode settings, in addition to "Manual" mode.  The Band and Mode button boxes are dynamic in that the details available change with different uses - different contests specify different bands or modes so these change to suit.   There is also some microwave transverter support inbuilt, but details on how that works and how to configure settings will be provided shortly.

It has internal automatic backup processes, autosave of QSOs once enough details are available, creates ADIF output files to match up with ADIF imports, generates Cabrillo V3.0 log files - all the normal things you would expect.

Where it differs majorly to VKCL is in the way contest rules are configured.  Mike hard-coded contest rules and that makes it impossible to change the rules and how points are accumulated during any given event. YACL's approach is more along the lines of the N1MM+ logger which uses UDC files (User Defined Contest files) to set the allocated points and timing arrangements. By altering settings in that configuration file, things like points versus distance versus band, relative timings of rework intervals etc - they all become relatively dynamic.  That is good news for Contest Managers and for new contests.  Note that UDC files for N1MM+ will not automatically work with YACL, but can be made to work for at least some contests depending on support and refinements in YACL.

Now for some good news - access to the latest version is easier. The 'About' box shows the current version detail, and the latest version on the web site, and offers a download link to update from.  That is in addition to the option under the Maintenance menu.

There is ongoing development work required for YACL to meet its aims, and it will take a while to get there.

They tell me "patience is a virtue" so I ask you now to be patient while bugs are sorted etc.. and definitely re-check for new updates to the YACL package.

There is now a YACL support forum at https://vk4adc.com/YACLSupport/index.php to make it easier to advise of 'adverse software issues' (ie bugs), functional requests and suggestions.

Most future comments about YACL will appear on the support forum so please look there before anywhere else !

And - I have no plans/thoughts of generating a formal Help option for YACL so you should try flying by the seat-of-you-pants in the first instance, the forum in the subsequent instances.