Have you ever been just in the right spot - and at the right time - to grab some tropospheric propagation (colloquially called "troppo") at VHF or UHF ?

Last year, I worked both New Zealand (ZL) and Norfolk Island (VK9) on 2 metre SSB via troppo. At the time, I did check the Hepburn Charts and noted the anomoly but didn't record the graphics.

Yesterday, I (plus some other stations in and around Brisbane) worked a couple of stations in Far North Queensland (FNQ) from here in South East Queensland (SEQ) again on 2 metre SSB.   John VK4FNQ in Charters Towers and then Ian VK4AFC in Atherton were worked on 144.100 at around 2140 UTC on the 28th, signal reports of 5/6 to 5/7 from them and reports of 5/3 to 5/4 back to them from me.

The characteristics of this troppo opening was that the signals from both stations were almost constant in amplitude through the whole of the period until they just faded out - unlike sporadic E where there may be extremely high peaks and then followed by severe fading a number of times before disappearing completely.

This effect was then compared to the current "Hepburn Chart" for Australia and New Zealand and it showed the 'anomoly' that was helping create the path. I realise that these charts are just predictions and not actual historical results. I grabbed the image from the web site and have provided it below....

Mouse-over for a larger image.. 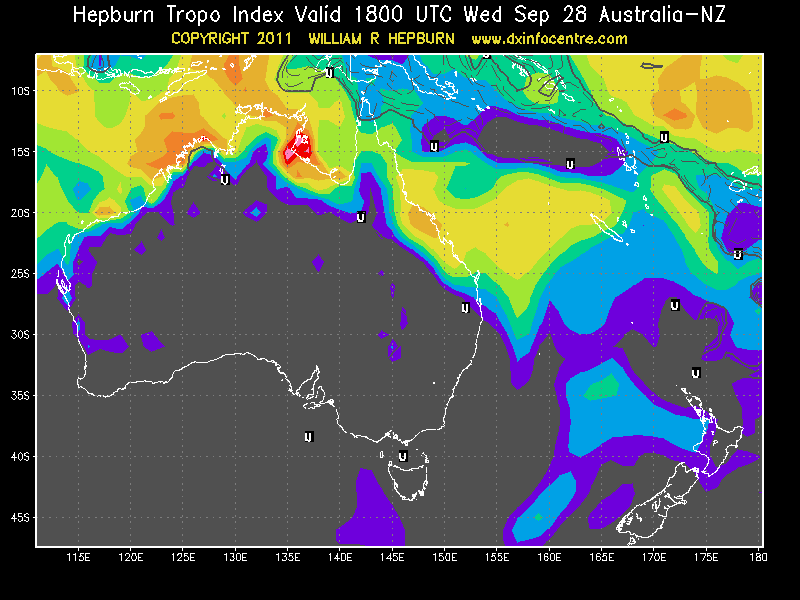 The darker orange patch along the north-east part of Queensland's coast was undoubtedly correct in this case... as a result of current weather conditions. The bottom section in light-blue / purple corresponds with the Brisbane area and the area covered is shown right up past Cairns. It is a pity that not more stations were on 2m SSB, but maybe they were on 2m FM instead.

The source of this graphical information is The DXInfoCentre at http://www.dxinfocentre.com/tropo.html

The info presented here is to remind others that anomalous propagation does, and will, occur randomly - but it may be predicted using tools such as these