Another page on this web site deals with a W1GHZ-based transverter to frequency-shift 145 MHz up/down to 2403 MHz ( / 2.4 GHz or 13cm) but the major issue with is that it will only produce around +17 to +18dBm (50mW to 60mW) of power on transmit. Obviously a power amplifier stage is essential for the long-term usefulness of the transverter in the field.

My original concept when I built it was to run a RFMD SPB-2026Z device a little above it's upper frequency rating to obtain around 1 watt of RF output ( +30dBm) but my initial experiments with the device and the small PCB sourced via eBay fell short of that target by around 7dB to 8dB. If I went back now ( 3 months later) and re-evaluated what I originally did, I would probably be able to do a better job of optimizing it. What I did instead was to look for alternative devices that I could make up into a slightly higher power PA.

My searching on eBay and the like didn't show up a lot of alternative but a chance discussion with Alan VK3XPD during the 2011 Winter VHF/UHF Field Day led me to believe that he might be able to help me out with some "pulls" - devices pulled from existing microwave equipment.  In due course, I acquired a couple of Celeritek CFH-2162-P5 plus a couple of Fujitsu FLL-120 devices in exchange for some $$. To make these up into something operational was my job. ( Extra info : data sheet for CFK2162-P5, alternative case style to CFH device but includes S-parameters and test schematics).

The task at hand was to "examine" these two parts electronically, create a PCB then build it up and, finally, get it to work. The whole process has taken me around two months because of other matters requiring my attention but I finally have a working power amplifier.

One of the things that I must mention was that while I was aware of S-parameter files for various devices, I have to admit that I had never paid a lot of attention to using them. Then again, I haven't done a lot of new design work - particularly at microwave frequencies -  until this year, most of my other projects have been loosely based on others' ideas - where they have done the majority of the work.  I have since made a lot of use of a freely-downloadable program called RFSim99 (a simple web search will let you find a copy to download or use the link provided) which allows the use of these S-parameters to optimize a single stage network for operation at or around a given frequency/band. I am not going to tell you how I used it (or how for you to use it) but it provided me with the insight to move ahead with the project, knowing what to allow for and what to expect in practice. In some ways, it was harder to find the relevant S-parameter files for the devices than anything else. One thing is for sure - I will be using it many more times on other microwave projects...

One of the things that immediately becomes obvious by using RFSim99 with the S-parameter data for the devices is how low the input and output impedances are - typically under one ohm - and that affects how the PCB layout can be used to transform these low values up to the typical 50 ohms we are used to. My second hope was that I would also be able to use the same devices and PCB layout at 3400 MHz - but whether that is true has yet to be built and evaluated.

My approach was to use tapered PCB traces to provide an impedance transformation to partially effect the low Z to 50 ohms as well as acting as an inductor to help match the devices' impedances. I wasn't sure that it would work out so I left myself a simple escape hatch - I put the tracks on the PCB layout but left them unconnected such that I could bridge across the gaps with solder, as necessary. The short answer is that the triangular PCB traces worked so all are bridged. A photo later shows more actual details of the final built-up version. 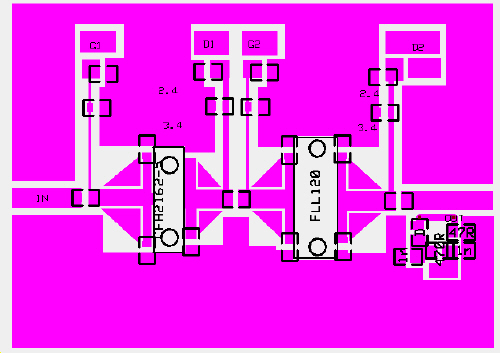 This is the raw RF PCB layout with places for tuning capacitances on both the gate and drain connections of each FET. There is a position along each quarter-wave choke feeding the bias and drain voltages where an additional bypass capacitor can be added to allow the same layout to be used at 3.4 GHz. There are components missing from the layout - like the series resistors from the input voltage pads to the chokes - these are 0.5 ohms, created by 2 x 1 ohm 0805s in parallel. As I found out, it is better to burn up a couple of SMD resistors when the drain is accidentally shorted to ground during optimisation than having PCB traces "fuse"... There are bypass caps and a few other resistors also missing from the layout but these exist in the finished product. The overall board size is 70mm x 50mm.

These power GaAs FET devices require a negative bias to control the quiescent drain current so a small PCB was made up to provide that voltage, complete with a transmit switching and the control components to force down a LM338K regulator's output to 1.25V ( normally +9.1V) if the negative supply fails.  I chose to use a small PWM device - an LT1376 - which, depending on connection, will allow the production of either a positive or negative output voltage from an incoming +12V supply. The actual output voltage value is determined by a pair of resistors (typically leaving one fixed, varying the other).  My PCB layout also incorporates a pair of trimpots (thus allowing independent bias setting for each FET) whose bottom end is grounded through a transistor arrangement when the overall PCB input control voltage goes from +12V to ground (i.e. a PTT function).  In the receive mode, the bias voltage at the RF PCB points is about -4.5V, dropping in practice to around -2.05V / -2.1V to achieve quiescent currents of 150ma and 200mA respectively for the drive and the PA stage.

The overall board size is 70mm x about 30mm, can be single-sided material. Please note that the lines "O/p = -5V if Vout grounded" actually refer to a smaller PCB containing just the PWM components and not the version with the trimpots etc on it. I forgot to edit it off the layout !

Both PCBs were created by my normal exposure/develop/etch process (described elsewhere on this web site) using Fotoboard2 double-sided FR4 material for the RF one, single-sided for the bias one. Through-hole rivets were used to connect the top and bottom planes of the RF board and well soldered in. Both planes/layers were "tinned" using a normal hot soldering iron and regular resin-cored solder to achieve a greater trace thickness.

I will start by suggesting that from my RFSim99 work that I was expecting overall gain across the two cascaded stages around the 24dB mark - if I managed to get the tuning and impedances correct. I didn't quite achieve that but I came acceptably close - around 20dB.

Testing of the PA was done by feeding in the transverter output at 2403, with it's IF input being driven by the signal generator at 145 MHz. The transverter maximum output was measured at +17dBm, with 0dBm IF input, prior to connecting to the PA PCB. The PA output was terminated in a 5 watt 50 ohm SMA-style attenuator ahead of my homebrew RF power meter.  Initially I was getting just 3dB of gain (+17 in, +20 out) without the triangular traces connected and without any added matching components. Bridging the triangles brought up the output power, with the final arrangement having a 0.47pF to ground added at the 50 ohm line point just after the input blocking capacitor, plus a 1pF at the Gate of each FET and a further 1pF at the Drain of the FLL120 PA stage. As you may have noted above, the driver and PA stages both run from the LM338K regulator at a +9V supply.

The board produced 2 watts of RF output (+33dBm) with -8dBm in at 145 after the tuning had been optimized. Confirmation at each point on the PCB was made by placing the metallic tip of a mainly-plastic alignment tool on the active signal PCB traces - if the output power went up then it wasn't yet optimized - and if it stayed the same or went down then it was !! ( A variation of "snow-flaking" if you like ! )

Power output peaked at around +38dBm with 0dBm of 145 IF input, or about 6 watts of RF. The output was starting to compress (versus input level) so it wasn't pushed to a higher output level. Of course I am not sure if the "flattening" of the overall output was the flattening in the drive power from the transverter or not. Under this condition, the 5 watt in-line attenuator was getting warm-to-hot, proof that a reasonably high output power was being achieved and certainly consistent with the measured power level.

The on-board directional coupler was quickly calibrated with a DMM on the DC output terminal so that I could use that value to compare RF output power at any later stage...

I didn't plan to make this article into a construction project for others - and it isn't one. It is a case of "I have done it" and "you can too" if you are willing to try - and do so hard enough. In other words, it is an ideas piece. You can glean some technical info from the board layouts and photos and if that helps you, you're welcome.

Finally, I must state that operating devices like these at microwave frequencies is unlike anything that will happen with things at HF, VHF or even UHF. Small PCB tracks are size-able inductances at these frequencies and the tuning capacitors used are typically physically small ( eg SMD 0603, maybe 0805's) as well as small in value ( ie 0.5pF, 1pF.. maybe up to 3pF or so). RF bypass capacitors are just 18pF to 22pF.

It's a brave new world working up at microwave !!