My fibreglass squid pole is 7 metres long and has an insulated hookup wire through the centre as the actual antenna wire. As such, the wire is actually about 7.5 metres long, and naturally resonant at around 10MHz ( as a 1/4 wavelength). That makes it easy to use on say 10.136 for 30 metre FT8 as it has a low feed impedance there but is not so good for the other amateur bands.

That raises the question: how do you ‘feed’ the squid pole wire antenna ??  My typical installation / use of the squid pole is as a HF antenna while out and about in the caravan so I have an ‘earth / ground’ effect from its chassis, regardless of how efficient it is at the lower HF bands.  The squid pole can be mounted on either the drawbar at the front or via a mount on the rear bumper bar, both having direct earth connections to the caravan’s metal chassis. That mostly takes care of the ground plane effect needed..

I have tried feeding the wire directly via coax and that sort-of-works for some bands but only if you have an antenna tuner in line to adjust out the anomolies. I have also tried an UN-UN (Unbalanced-Unbalanced RF transformer) as well and that makes it better – but having an antenna tuner in line is virtually mandatory, preferably an auto tuner.  What ratio UN-UN ? My latest UN-UN has outputs at 4:1, 9:1 and 16:1 so caters for a fair range of impedances when connected to the 50 ohm coax from the radio via the tuner.

Recent experimentation shows that my LDG Z11-Pro2 auto-tuner will match that 7.5 metre long piece of wire on all bands from 3.5 to 50MHz but that doesn’t necessarily mean much. Looking further into it shows that while the load presented to the transceiver may be synthesised to something towards 50 ohms, it may not be as good as you first think. The transceiver I use with that tuner is an Icom IC-7000 and it has a screen that shows you the RF output power, ALC and SWR all in one display. That display reveals more.

The interesting data shows that while the ATU may have ‘tuned’ and the LEDs on it show that it is matched, the load ‘seen’ by the transceiver may be significantly different to 50 ohms, and that is obvious when you look at the displayed SWR bar. I have seen basic SWR values over 3:1 on the radio while the ATU LED shows green – for matched…

It is at this point that the optional UN-UN ratios come into play. My UN-UN has all three ratios mentioned above extended out of the ABS box via stainless steel screws and the 7.5 metres of antenna wire is terminated in a crocodile clip making it easy to move it from 16:1 to 9:1 etc.

Selecting one frequency on each band (eg 3600 KHz then 7100KHz etc.), making the auto-tuner go through its tuning routine while on one ratio tap, checking the basic SWR on the radio. Repeat the process using each ratio tap. Note which ratio tap gives the best SWR at the radio.  Even so the raw SWR seen by the radio may still be greater than 2:1 on the best available tap.

My countermeasure to that is what I call my “porcupine” – a small-ish tapped coil that bears a faint resemblance to an actual porcupine in that it has multiple taps protruding along its length on each of two sides. The actual coil construction is not critical so long as it has lots of taps (thus varying inductances) available. Mine was created with 16SWG tinned copper wire on a 32mm OD PVC tube, the 15 turn winding occupying 75mm of the former – giving about 2.5uH of total inductance. In reality, I found during testing with the squid pole that a tap every second turn is all that is required.  The inductor is connected in series between the UN-UN and the 7.5 metre antenna wire and that croc clip makes it easy to adjust how much of the inductor is actually used: none, some or all. 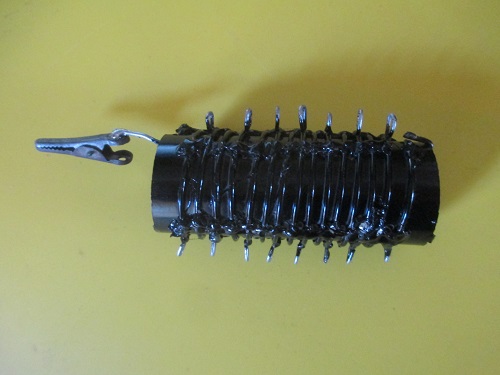 The 'porcupine' coil :  15 turns of 16SWG tinned copper wire on a PVC tube former with the turns held in place by using a hot glue gun, taps soldered into place then the connections masked while spray painted with black gloss enamel paint.

Now comes the testing phase again. Use about ½ the coil length, same frequencies as previously, run through the autotuning process, note the raw SWR on the radio. Move the tap point to ¼ of the coil and try again. Move to no coil in line, and repeat. Ditto for ¾ of the coil and then the full coil. Note which setting provides the lowest SWR back on the radio’s display for that frequency on that band.  Moving frequency significantly even within a band may necessitate a tap point change and almost certainly an ATU re-tune.

Please note that what we are trying to accomplish here is varying the wire’s effective length so that the impedance reflected at the feed point is a closer match via the tuner than it would otherwise be - we are not trying to base-load the wire antenna to resonance.  That might be possible at frequencies lower than the natural resonance around 10MHz but not above that value. It is still the tuner that is doing the work, we are only adjusting the inductive or capacitive value it 'sees' as the antenna at that particular frequency so that it can set itself to the optimum values for a match, while remembering that it has a finite number of internal values available to select during the tuning process.  Adding a little more series inductance can make the ATU find a better set of 'match' values than without it.

I was able to get far lower SWR values with the ‘porcupine’ in line than without. Original SWR values of 2.5:1 and greater were reduced to under 1.5:1 with some showing closer to the ideal of 1:1, all dependant on the tap in use at the time.

Here is a tip for users with radios with an internal SWR plot function:  Do the whole tuning process as before but then use the internal function to plot the SWR for that band on the display. If the SWR dip is not centred around your desired frequency (eg 14.074 for FT8), adjust the tap point on the coil by one position in one direction then re-plot. Too much series inductance and the frequency plot is offset low, too little and the plot is offset high. Make sure you re-tune the ATU after each tap change. It makes that ‘optimum position process’ simpler – and quicker…

This squid pole re-visit was actually triggered by a problem noticed during a recent caravan trip and when I was operating FT8 on both 14MHz and 10MHz. The ATU started to flicker LEDs indicating a higher SWR than normal as the 15 second transmit period elapsed. The UN-UN case was getting warm under the 50% duty cycle and the 100 watts of transmit power, and the SWR on the radio display was rising from 1.2:1 up above 3:1.  The cause was obviously heating of the UN-UN’s toroidal core due to saturation at the 100 watt level but I was pretty sure that it was an FT140-61 core so it shouldn’t be saturating. The UN-UN was opened up after the trip and the whole toroidal assembly was replaced with another ferrite core (40mm OD, 27mm ID, 18.6mm thick) plus a truly quadrifilar enamelled wire winding (10.5 turns of 4 x 1.25mm enamelled wire), but connected exactly the same way as the original.   Further testing showed no heating and no SWR change even under extended periods at 100 watts of RF. 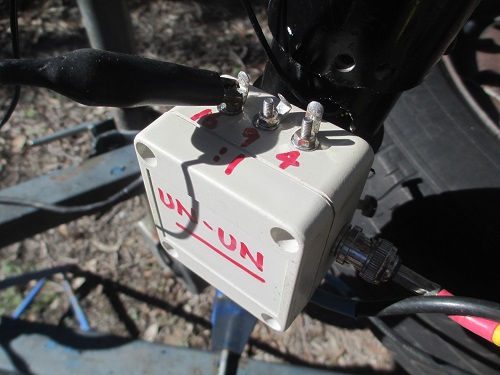 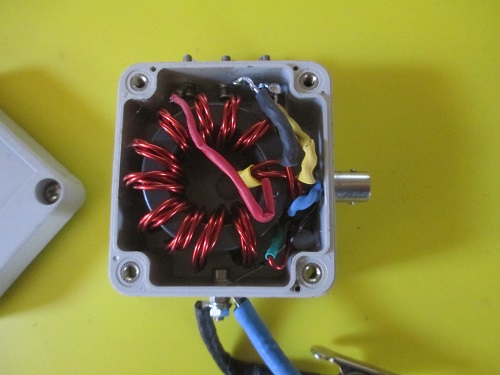 The 'renewed' UN-UN internals. Four lengths of 1.25mm enamelled wire were twisted together with a drill before being wound onto the toroid. Heatshink helped to keep the resulting wires formed correctly. Different colour heatshrink was then placed on the output wire junctions to assist determining which screw lug they should attach to (eg green = ground, blue = 50 ohm BNC centre pin, yellow - 4:1, black = 9:1, red = 16:1). Yes, there are two "ground" leads, a short one plus a longer one and both made using braid recovered from coax cable. The short one is generally used but sometimes the longer one is because the ground point is too far away!

The thing that it did do (replacing the toroid) was cause all my previous settings to be invalid so I started the tabulating process again.  When I noted the raw SWR values on the radio, even when the ATU had ‘tuned’, that was when I considered more experimentation was required.

The true test will come the next time I am operating portable and using FT8 !!