I was seriously thinking about buying another SDR dongle that would work at HF but my research showed that many other people seem to be using an Up-Converter in front of their existing SDR to achieve just that.

Next, a bit of web research on Up-Converters. Several designs can be found on the web but a quick search of eBay showed that they are readily available from China (etc) but not so much locally. While I wasn't in a gigantic rush, I didn't really want to wait 3-4 weeks for one to come from Asia. Really my best alternative was to build one if I wanted one sooner.

The design by TTRFTech was shown in a number of photos and it seemed pretty straight-forward. It was obviously a 7-pole LPF into a mixer then into a 7-pole HPF to the output port (/SDR) - with small relay option to switch from direct (ie VHF) to via-the-upconverter (/HF). The local oscillator signal for the mixer was generated by a 100.000MHz SMD crystal oscillator and fed to the LO port via an attenuator.

In my terms, all fairly easy.  With their design, a signal at HF (eg 10.140 MHz) is in the input LPF passband, mixes against 100 MHz to produce a 110.140 MHz signal which passed through the output HPF without attenuation. I must add that there is a corresponding mixer product that occurs at 100-10.14 = 89.86 MHz and that the 7-pole HPF won't attenuate it much give its proximity to the pass-band. The HF signal won't get through much though - probably about 50-60-70dB rejection there.

I checked my bits box and found I had a RMS-25H mixer (5-2000MHz) which seemed a bit of an overkill to use at HF but I also had a tube of SA612 SMD-style mixer ICs. These should work well to 200MHz so use as an up-converter from 1-30MHz to around 100-130MHz is within operating frequency range. I also found a couple of DIL-style 80.000 MHz TTL oscillators plus a 66.000 MHz one. A bit low in frequency but still workable - even if the resulting output was in the FM broadcast band.

I decided to lay out a PCB to suit the SA612, add the relay option too - just in case, use the same arrangement of 7-pole filters for input and output as per the TTRFTech PCB design, and make it optional to use either a 7x5mm SMD crystal oscillator or a larger DIL package. I also allowed for an optional 3V regulator if the SMD oscillator was to be used.

While I could have made it smaller than the final size of 50x45mm, that footprint made it easy to use reasonable track and pad sizes and allow for the 14-pin-DIL oscillator's physical size. Layout complete, the double-sided PCB was exposed, developed and etched. The side-to-side holes were drilled ready to run wires through but only a few were done initially - as the photos reveal. The SMD mixer was soldered to the board plus the generic values of capacitors - bypasses etc, the 78L05 voltage regulator too. The crystal oscillator was then added The output HPF was designed with the assistance of the Student Edition of Ansoft Designer (SV2) and the impedances were just assumed as 50 ohms. Given that my LO was going to be 80MHz (at least initially), the cutoff frequency for the HPF was set as 65-70MHz. Those parts were added to the PCB too.

It was time to test the HPF so +12V was applied to the 5V regulator and 3.7V resulted. Hmmm. The oscillator is circa 1992 (by the date code) and is a pure TTL version - drawing too much current for the regulator to handle. I removed it and added a 7805 1-amp version by soldering it to the same PCB pads. Voltage applied again : 5.1V now. I checked the output pin - 80.010 MHz in round figures.

Ok back to checking the HPF ! The sig gen was applied to the blocking capacitor on pin 1, the RF signal input pin. The output from the HPF was fed to my IC-R7100 receiver to display signal levels. I didn't write down numbers but at 20MHz from the generator, the high-side signal (~100MHz) was around S9 while the low-side image (~60MHz) was just audible and S0 in the receiver. The HPF was working.

The next step was to calculate the input LPF - Ansoft Designer again - with a cutoff at 35-40 MHz. Those parts were added to the PCB and the signal input feed shifted to the coax socket centre pin connection. The power was applied and the signal versus image levels rechecked. Very similar - that meant that the LPF was not affecting overall sensitivity significantly. Next was to feed in a signal just over 25 MHz (therefore inside the R7100 frequency coverage) and see whether it could be heard at the output port (ie signal pass-through). That value came out at about XXdB (the amount the sig gen level had to be increased for the same displayed signal level on the R7100, to be re-measured because I can't remember the value).

I could hear HF signals on the R7100 with the sig gen down around -120dBm. This little project was working.
Elapsed time : 2 days from start of PCB layout, but in reality probably about 3-4 hours of actual involvement.
Effective out-of-pocket cost : $0, since I have an expansive parts box.

The final test was to put it in front of the SDR dongle and check my WSPR transmitter beacon spectrum.... The RF from the transmitter port was fed via a 40dB coupler to a variable attenuator then to the up-converter input. The SDR# software was then used at 90.1MHz, 94.09MHz, 98.13MHz and 101.08MHz respectively to check the transmissions at 10, 14, 18 and 21 MHz. The in-line variable attenuator was carefully set so that the reference signal only just tipped the 0dB graticule point and therefore less likely to have the SDR (and the up-converter) in overload and contributing 'spurious' signals of their own. Each screen was 'grabbed' using the Windows Print-screen option, pasted into Windows Paint, cut and resized into the final images as shown below.

When looking at the images, the frequencies seem wrong but if you take the 80.010MHz LO into account, they normalise to the 10, 14, 18 and 21MHz frequencies expected. You need only look at the results: the noise floor typically about -55 to -60dBm, the reference signals at 0dBm. The HF signals from the WSPR beacon actually look pretty good.

Finally, I tried the 50MHz signal directly into the SDR via the attenuator. Again the reference level was set using the in-line attuator but the spectrum is no-where near as ideal. Can't win them all !!!

Would I buy one of these types of units from eBay ?? Yes, probably, if I didn't have the skills and resources to make my own.

Now you are probably asking yourself - where is the schematic ??
To be absolutely candid, I didn't draw one.  I did the PCB layout using some data sheets for pinout info but the rest was inherent knowledge after looking at the two PCB layout images provided earlier.
Not drawing a schematic to lay out the circuit board is fairly standard practice for me - I have been doing PCB layouts for over 30 years now - and the only time I do is for documentation for this web site or as a layout-checker for the more complex boards - and I draw the schematic from the layout & not the other way around..

What about the LPF & HPF values ?? Ansoft Designer SV2 - if you are lucky enough to find a copy to download and install.  Otherwise there are a number of other designer packages around.

I do admit to one mistake here : I omitted to check the input and output impedances of the SA612 device first up. I just assumed 50 ohms because I usually use MMICs that have that impedance. In reality, I should have used about 1.5 Kohms for each value. That makes the input LPF similtaneously transform 50 ohms to 1500 ohms with a cutoff of 35-40MHz,  That makes the output LPF transform 1500 ohms to 50 ohms and a cutoff of 65-70 MHz.

I did check the availability of 120 and 125MHz 3V SMD oscillators with RS Components but they weren't next day availability. Using a different local oscillator frequency means a different HPF design - but - it does take you out of the FM broadcast band for your SDR operation - a real benefit if you have any local FM transmitter sites nearby. 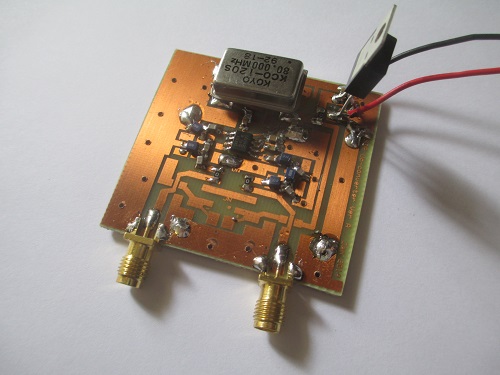 The 'partially-finished' up-converter PCB. Only some of the wire-throughs are done but each one represents a ground / earth from side to side that 'should be done'.

This was one of the inspiration PCBs and uses an RMS-5LH mixer. Layout has a relay option but is not fitted in this build.

The Ttrftech PCB - this one uses an ADE-1 mixer but is fundamentally the same idea, but this one does have the relay fitted making it easy to effect pass / bypass switching.

The 21MHz WSPR transmitter spectrum... Remember to take the 80MHz off the "dial" frequency.

The 18MHz WSPR transmitter spectrum... Still have to take the 80MHz off the "dial" frequency.

The 10MHz WSPR transmitter spectrum. Yep, yet again : take the 80MHz off the "dial" frequency.

The 50MHz WSPR transmitter spectrum... Not as clean as desired but given the transmit power at 200mW, the low level signals aren't going too far.
No, correct dial frequency !

While it is never going to be as good as a multi-thousand dollar spectrum analyser, it is a good alternative for the ham shack.