So you are considering buying/installing the CR-282 High Stability option for your IC-706Mk2G....  Is it worthwhile ??? Maybe it isn't really necessary for HF but use on VHF/UHF is a different scenario.

From the Icom glossy brochure for the Mk2G :

I was lucky enough to get one in my IC-706Mk2G when I bought it through eBay but I didn't really appreciate how much difference it made until I was able to do a drift comparison between it and a "standard" stability Mk2G.

I used my PICAXE-based audio decoder until to sample the audio from each one under near-identical conditions - with the same 10.000 MHz RF signal source (via a T-piece so fed in parallel & via 40dB of attenuator) from my shack TCXO and just using the 43rd harmonic at 430.000 MHz. The actual dial frequency on each was set to 429.99900 (with TS rate at 1 KHz) and then the Dial Lock button was pressed. The DC power was applied to both radios and both were simply switched off from the front panel switch prior to the tests. I used to do this style of "drift" test manually but my decoder unit allows the computer to do the "hard / tedious" measurement "work" while I do other things - like sleep. The frequency measurements are conducted at the rate of one per second with a tolerance of +/- one count = +/- 1 Hz.

This is where it gets interesting.....  The following Excel chart is from my unit with the CR282 fitted. The Y-axis (vertical) is audio frequency in Hz, the X-axis (horizontal) is time in seconds - so 10 minutes worth. The timing starts at radio switch-on and a 26 degree Celsius ambient temperature. You can observe that it takes a few seconds ( up to 20) to actually settle down, lock to frequency etc... 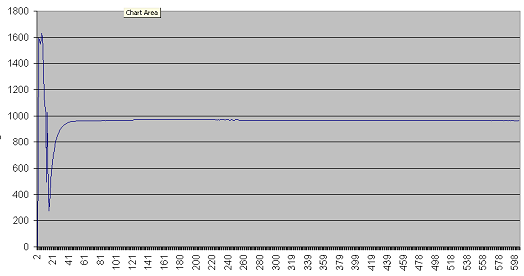 After the 1 minute point, the frequency varied less than 10 Hz in the time up to 10 minutes.   A hour later, the frequency was still within the 10 Hz window.   Not bad.

Don't be fooled into thinking I did the test just once. It was actually repeated about 10 - 15 times with basically the same outcome so I consider the test results fairly representative.

How did the "standard" unit go under the same test conditions ????  The following data was generated the same way and was typical of the other test runs that preceded it.....

The Y-axis (vertical) is audio frequency in Hz { note : different auto-scaling } , the X-axis (horizontal) is time in seconds - so 20 minutes worth. The timing starts at radio switch-on and a 26 degree Celsius ambient temperature. You can observe that it takes a few seconds ( up to 5 for this one ) to actually settle down, lock to frequency etc...

The most obvious part of the comparison between this one and the chart above is the continual upward frequency drift. The drift after the first minute (remember the "basic" specs above) was such that it went from 454 Hz up to 846 Hz at the 20 minute point, close enough to a 400 Hz shift, and it was still climbing. At 30 minutes, it was 864 Hz. At around the 40 minute mark, it started slowly dropping to 760 Hz and then slowly rose again back up to around 810 Hz by the 50 minute mark. In summary, the true frequency is somewhat "unreliable".

That was the "short term" chart. How about a "longer term" ? That one is quite interesting....

Note that there is no time scale on this one ( no X-axis scale ). The first 20 minute data part is the same as above. The first dip in frequency was around 45 minutes (as stated above) and the total observation period was just over 9.5 hours.  If you take the mean value of the cycling, it still represents a near-100 Hz downward drift over the period. Some of that may also be the drop in ambient temperature from 26 down to 23 or below but with the case temperature of the 706 in that equation, it isn't too likely to be prominent.

I have my suspicions that some of the frequency cycling has to do with the internal cooling fan operation. My transceiver (with the CR-282) already has the "fan mod" in place so the fan runs all of the time, although slower than when on transmit. And, mentioning transmit, the case temperature will rise if you do a "reasonable" amount of transmitting using it - so the frequency "drift" cycle will be varied even more than that above.

Vertical is Hz, horizontal is seconds.

This is an extract from the above data and commences 30 seconds after the start of the test.  The frequency shift over 1.5 hours is a little easier to see and does not have the wobbulation that the other radio has. As is standard practice, all audio frequencies measured are +/- 1 Hz resulting in the "jitter" on the above trace results.

I still have more tests to run - such as from a no-power state - but even just those results above justifies thinking about installing a CR-282.

Now is the time to mention that a High Stability Oscillator option is still somewhat useless unless you periodically trim the frequency to reduce errors. The small inductor in the XO tin box is "touchy" to adjust and will easily shift the frequency of even the HS unit by 50 Hz or more at 430 MHz just with a slight pressure. I have "capped" mine with a seal of candle wax - just one drop on the top - to provide better mechanical stability. Wax is good because you can still press an alignment tool through it and, if necessary, a quick re-heat with the tip of a soldering iron re-melts it.

Of course the other option is to never power it off and keep it in a constant ambient temperature environment..... ( and use it only for receive so it the transmitter use doesn't cause a temperature rise....) - and do the "fan mod" too..