I have been doing a bit of experimentation with a chip from Melexis, a TH71221, a single chip FSK/FM/ASK transceiver IC, lately, in conjunction with another project. The quick details of the chip are per the following extract :

The TH71221 is a single chip FSK/FM/ASK transceiver IC. It is designed to operate in low-power multi-channel programmable or single-channel stand-alone, half-duplex data transmission systems. It can be used for applications in automotive, industrial-scientific-medical (ISM), short range devices (SRD) or similar applications operating in the frequency range of 300MHz to 930MHz. In programmable user mode, the transceiver can operate down to 27MHz by employing an external VCO varactor diode.

The TH71221 chip will produce about +10dBm in the VHF/UHF region when used in "transmit mode" and can be configured by a PICAXE chip - in this mode it really just a frequency synthesiser.  It only requires either a on-board crystal or an external oscillator for the reference signal, does all of the rest of the hard work except for some external VCO parts ( the coil, any external capacitances, an optional external varicap diode) and the lag filter parts.

I thought that a new version of my X-Locker project - now called version 3 - utilising one of these would be workable once I had conquered the programming and the RF side. This was particularly seen as a VHF/UHF complement to the UHF/Microwave LO board created by VK3XDK using a Si4133 chip - a synthesiser-only chip. The difference between the V2 and V3 X-Locker projects is that the V2 provides for a varicap diode control of an existing oscillator while V3 actually has that oscillator on-board, within the TH71221.

If you look at the last line of the Features and Benefits dot-points, note the casing - a 32 pin QFN no-lead style just 5mm x 5 mm square !!! Yes, it is very small and looks like this : 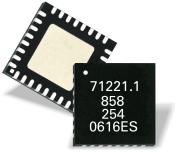 That makes the whole assembly relatively small BUT, as I found out,  a real pain to work on - and certainly not for the inexperienced. I found that the only way I could reliably "affix" the chip to the PCB was using the hot air from the SMD re-workstation. Even then it is a pain to try to place in the exact position to avoid tracking across adjacent lands on the PCB - and thus for the thing to operate.

It took me a while to get the software (1) small enough to work in the limited memory of the PICAXE-08M (256 bytes); and (2) actually make the chip accept the transfer of the 4 x 24bit configuration words. Those requirements alone took many hours. I originally started off with the last version of the X-Locker V2 code then re-wrote and reconfigured it for the TH71221 registers, and simplified it as much as possible to make it more compact. A larger PICAXE series ( eg a "14" with more memory lines ) would undoubtedly have made the coding easier but it would also have made the final project PCB larger.

I also decided that I would do away with a slug-tuned inductor for the VCO and elected to go to a 1008 SMD style. It would mean having to select an inductor value appropriate to the required frequency but simplified the board layout as well as making it smaller. The SMD style is smaller, cheaper, and more robust so less susceptible to microphonics etc.

That meant that the main components on the board were now a PICAXE-08M, the TH71221 and a 5 volt regulator in a SOT89 SMD style. There are quite a few other SMD resistors and capacitors required to complete the circuit and the standard board layout was for 0805's for all of these parts. The final board size was 40mm x 22mm and allowing for the component heights above board plus PCB thickness itself, about 3.5mm to 4mm thick.

The actual PCB size is just 40mm long x 22mm wide !!!
I am actually using double-sided PCB but all tracks are on just one side, the other side is simply a full earth plane.

This is the sub-version "b" PCB layout - with a few alterations from the "a" layout.  You could sit and trace out the schematic from the above layout if you were really keen but it is likely to be changed as more experimentation and use takes place. Of course, emulating it doesn't give you a working device because the "firmware" - the 08M coding - is not available publicly.

The first step is to get the TH71221 onto the PCB, this being the hardest part due to it's small size plus the need to visually check that all 32 leads are connected and are centred on the PCB tracks. That requires 360 degree visual access along the plane of the PCB.

The remainder of the SMD parts are then mounted on the board. The black SMD component at the bottom right-hand corner is the VCO inductor with the varicap diode for the frequency control of the VCO just to the left of it. The "lock" LED is just to the left of bottom centre.

My first use anticipated for the V3 is as a synthesiser/LO to replace the crystal (& oscillator) + the X-Locker V2 in the 23cm Kuhne transverter as described elsewhere on the site. That use means a frequency of 96.000 MHz is required.  Using a 220nH SMD inductor for the VCO gave a lock range of about 75 to 112 MHz with the varicap diode type that I used so 96 MHz was well within range. I also put the alternate frequency of 95.9166666 MHz into the configuration file to help me test it.

The V3 locked on power-on (after solving all software issues), the on-board lock LED lit, the frequency displayed on the counter as 96.0000 with my external TCXO as a reference signal. I put the shorting jumper on the 08M pin and it shifted to the alternate 95.9166 on the counter. I then checked the ouput level on my spectrum analyser as -1dBm (crosschecked against my calibrated sig gen output). Then I changed the output level setting bits in the TH71221 setup and the output jumped to +11dBm. There are actually 4 power level settings in the setup of the chip and I ran out off accurate cross-checked power measurement on the analyser at +13dBm - the actual output level was greater than that - certainly +15 or higher.

As far as my spectrum analyser is concerned, the signal is "clean" - no spurious are showing over a +/- 25 MHz range - but I cannot actually measure phase noise on it. When I listened to it on my local VHF receiver I could detect some "buzz" but then I realised that I still had my DMM monitoring the VCO control voltage line - removing that connection also removed the buzz.

I also noted a useful side-effect during some experimentation time. The TH71221 reference input pin can just have a crystal connected between it and ground so I added a 10.000 nominal crystal there and the frequency showed about 1.4 KHz high at 96.000. Plugging in the external 10.000 MHz made the frequency jump to 96.000 exactly thus over-shadowing ( or over-powering ) the on-board crystal. I didn't attempt to trim the crystal to frequency although a series or parallel capacitor would achieve that. Whether the crystal would oscillate - or not - was determined by the amount of shunt capacitance across the crystal from the attached coax lead - a very short lead - yes, a long one - no. All useful to know as a fall-back if the external reference frequency source fails.

27 Feb :  With the V.3 PCB mounted in the Kuhne 23cm transverter, the device outputting a signal at 96.000 into the frequency quadrupler stage at power setting "01" (level 2), the transverter is hearing minimum discernable signals down in the high -120 dBm range. The concern was that with a very strong signal from the sig gen, the received noise ( presumably oscillator phase noise ) remained. I know it is a bad idea to frequency multiply synthesised oscillators so on to the next step.

The inductor on the V3 PCB was changed to 27nH, down from 220nH, and the frequency divisor in the TH71221 software quadrupled, the external varicap diode disconnected (thus leaving just the internal one functional) and no other changes were made.  The V.3 PCB locked at 384.000 MHz with about 2.7V of control voltage on the varicap. The receiver sensitivity was poor as the mixer injection level had dropped - presumably the effect of the 100nH inductor in the quadrupler's collector. I tried strapping across the 100nH but then there was an obvious impedance mismatch effect involved as the LO level into the mixer dropped even further.

How did I decide that the inductance should be just 27nH for 384 MHz operation ?? My LC calculator software told me so.

There is still more experimentation to be done but it is nice to see that, in this case, practice follows theory. Unusual, perhaps, in the view of Murphy's Law..

3 March : Another brief time was spent in experimentation but this time I was looking to improve the phase noise. The reference divider and divide-by-N numbers were changed downwards (together) to maintain the original 96.000 output frequency. As the reference frequency rose, the modulation effects of the phase noise seemed to drop. Obviously all to do with lag filter properties (which remained unchanged for the experiment).  The other effect noted was the earthing of the X-Locker V.3 PCB - using multiple earth locations reduced the phase noise slightly.

I also modified the PICAXE code so that I could run it in an incrementing-divisor mode that echoed the divisor in use back to the RS232 port. By starting the divisor at 100 and incrementing by 100 for each time it looped, it allowed me to check the PLL lock range for a few given inductors soldered to the PCB. With an 83.3333 KHz reference frequency, that stepped the VCO control at 8.3 MHz intervals and the Lock LED lit if the normal conditions were met (i.e VCO in lock range). By watching the computer screen and the Lock LED, I was able to get an idea what range was available for a given inductance. It was interesting to note the effect of the PCB track lengths in the frequency coverage since I had two positions where the same value inductor could be soldered.... I didn't tabulate the results of this test but it was an eye-opener.

I did a few tests today regarding VCO values :

With the 680nH left in the circuit, the PD test point voltage was 1.98V at 32.000 and 2.35V at 30.000 so the varicap is well within the normally used control voltage range. Note that this corresponds to 4.98V less the value given for the actual voltage applied across the varicap, ie . 3V for 32, 2.63V for 30 with, as expected, less diode capacity with the higher applied voltage thus a higher VCO frequency.

At the TH71221's highest output power setting, the RF power meter read 20mW (+13dBm) at 32 MHz, and the 3rd highest was 10mW (+10dBm). I couldn't accurately read the values at the TH71221's two lower power positions even though the frequency counter easily displayed the correct frequency, presumably in the order of 0dBm and -10dBm respectively.