The plan was to go to the high ground behind the Gold Coast, back to the cattle "farm" that I have access to. I had been keeping an eye on the BOM weather forecast early in the week and was leaving it until Friday morning to make a final decision as whether to go and set up portable - or chicken out and stay to operate from the home QTH.

What would you do when faced with a forecast of...

I checked the forecast Friday morning to find that the chance of showers had risen to 60% although the maximum temperature forecast had dropped to 31 degrees.  I have suffered through too many storms while set up for field days to want to go through too many more - light to medium rain is ok, storms, well no.  The trip was off so I did mundane things like mow the grass and tidy the radio end of the shack table to make space for the microwave IF and transverters etc..  Friday afternoon saw a storm come through - lightning, thunder and 12mm of rain in a very short but fierce storm and I was starting to think I had made the right decision.

Saturday morning saw me getting the final touches done for the field day, not that I was in any hurry to make the 0100UTC start time. In fact, I didn't start operating until just after 0230UTC, operating on 7MHz plus some 2m SSB and 50MHz SSB. Someone asked me to QSY to 432.150 and while I could hear the other station, the IC-706MK2G transmitter wasn't producing any output power. I did a fairly quick equipment changeover to install the IC-7000 and then made the contacts.

I had the gear set up for 1296.150 and tried a contact with Roland VK4VDX but he reported my signal was distorted so I left that band alone after that. I had the 2403 / 3400 MHz transverter box set up as well but didn't even try to make any contacts there.

By about 0415/0430UTC, the static crashes had invaded even 6m and 2m SSB, let alone S9 on 40m, so I had a look at the BOM RADAR and that made me quite glad I hadn't gone up to Beechmont after all. I have marked what would have been my approximate position at QG61OV...

I continued to work through the QRM as best I could and then by about 0530UTC, I was immersed in my own storm front. Lots of lightning and thunder all around me, rain pelting down on the building and I kept trying to work on through the static crashes. I grabbed this screen dump just after 0530UTC / 3.30PM local time.... 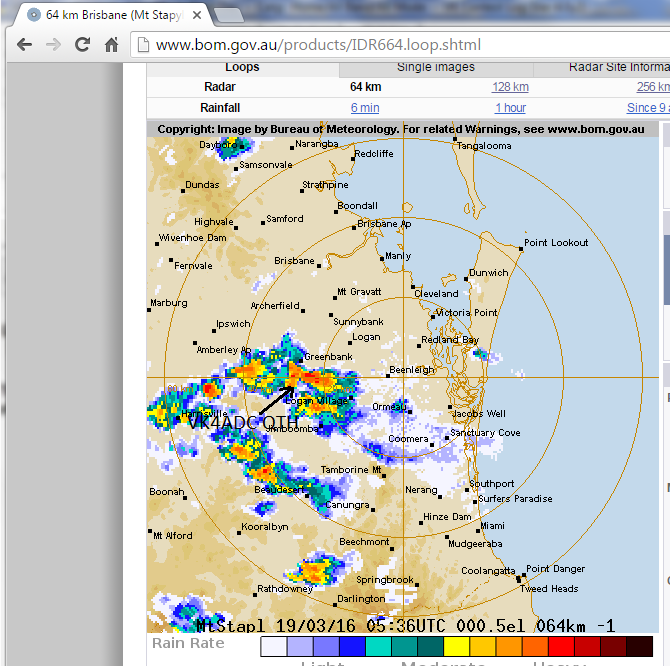 I continued to work through until just after 0830UTC / 6.30PM local time achieving 134 contacts in the 6 hours, scoring an unconfirmed 374 points.

The contacts breakdown by band was: 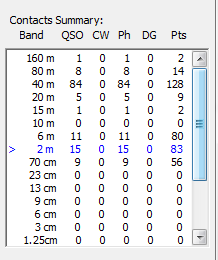 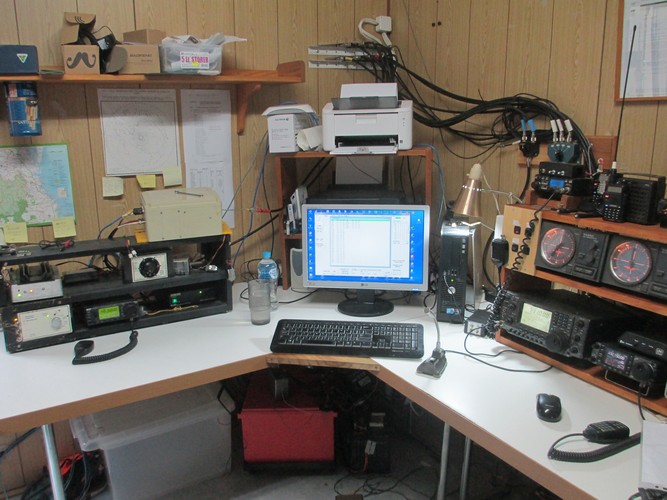 The overall view of the operating position: 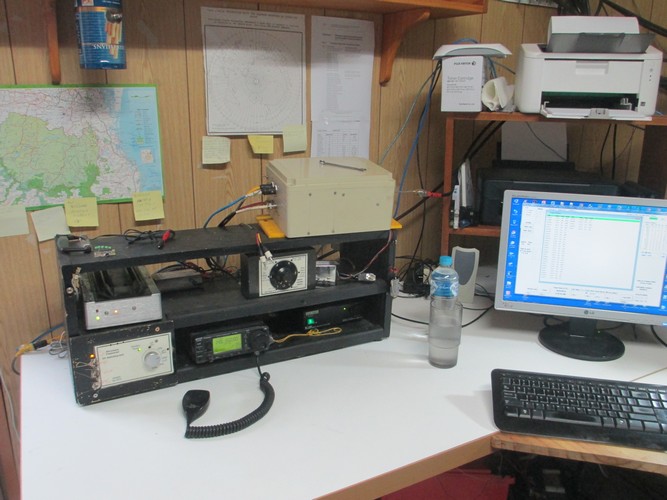 A sightly better view of the transit box with the 23cm transverter at mid-LHS plus the beige/grey 2.4/3.4 transverter box. The 'box' was powered by the small switch-mode AC supply at bottom RHS of the bottom level of the box.

The RHS of the shack equipment:

The blue 4-pole coax switch is for the HF antennas, position 1 is the Cushcraft A3S tribander, position 2 is the 160/80/40/30m mutiple dipole oriented East / West so giving maximas to the North and South, postion 3 is for another multiple dipole array for 80/40/30m but oriented North/South thus giving maximas East and West. The 4th posdition will eventuall connect to antennas for 18 and 24MHz.

Not visible in any of the photos is the foot switch for the IC-7400. The SM-20 desk mic was in use allowing me two hands on the keyboard to enter the data into VKCL.

Final note : that WAS water in the plastic tumbler and the water bottle behind it.