I recently bought a pack of 5 x RD16HHF1 HF power mosfets via eBay and ended up with an unhappy outcome, devices were supplied but they weren't RD16HHF1's. I had heard that there were fake devices being distributed out in the eBay world but this was my first exposure to them.

The order was placed on shieldsfans eBay store for the pack of 5, my payment via Paypal as normal, yet after a week, eBay still did not show them as posted. I emailed the supplier via eBay's "ask the seller a question" to be advised a day or two later....

dear friend，we have send your package to our deputy company, please don’t worry about it, and youw ill receive it soon,have a good day,best regards,

I suppose I should have "smelled a rat" then (eBay requires the seller to have the goods they are selling) but I then waited another 30 days before the package finally arrived. There were 5 x TO220-style devices in the bag, marked RD16HHF1 so I thought I was right to go ahead with my HF PA project. Even so, I logged back into eBay and provided a negative feedback based on the fact that the supply took far longer than was indicated on the listing plus it was being shipped by other than the seller. You can't edit feedback once left but if I could have, I would have later edited it to show fakes supplier..

I fitted one device to the power amp PCB and applied power. The power supply went into overcurrent shutdown straight away. I unsoldered the 'drain' connection and the current dropped down to the few milliamps consumed by the other devices on the PCB. DMM measurements indicated it wasn't short circuit but it didn't explain the short-circuit level power drain. I removed the device and replaced it with a second device, and again effectively a short-circuit by virtue of the current drain. It was acting more like an SCR than a mosfet.

It was at that time I looked more closely at the physical devices themselves, noting that the code printed on the case was rubbing off after only minimal handling. A search via Google images was quite revealing...

Two more "real" RD16HHF1 devices, again note the Mitsubishi logo with dimples on each side , the part number and then the batch number detail on the 3rd line.

Two more "real" RD16HHF1 devices, note the Mitsubishi logo and dimples, the part number and then the batch number detail on the 3rd line. 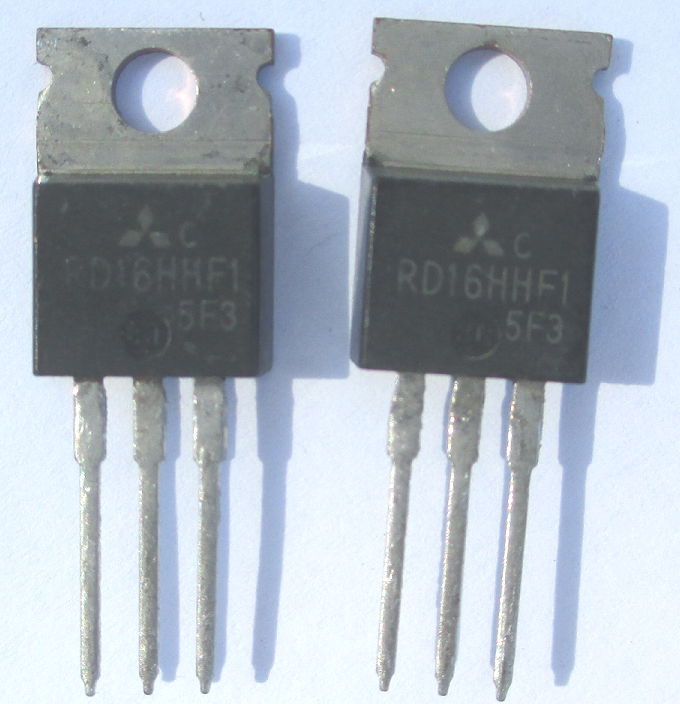 Two  "fake" RD16HHF1 devices, note the Mitsubishi logo with the C next to it, the part number and then the minimal batch number detail on the 3rd line. Note also the poor structure / tinning on the three solder legs and the partially wiped-off markings on the LHS device. 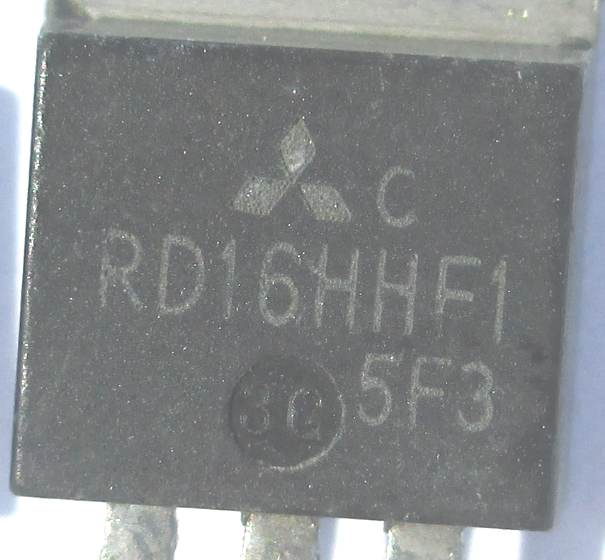 Closeup view of the device on the RHS. The 3G impression does not appear on "real" devices, which have plain dimples up the top.

I then went back to my eBay history then to discover that when I clicked on that purchase link,  shieldsfans no longer had a store available.

Whether someone at eBay investigated my negative feedback and saw that I mentioned that the product was not being shipped directly by the seller, I don't really know BUT if it slows down the supplies of fake devices to the market then I am happy with the outcome despite having paid for 5 devices that really weren't what I thought I was ordering.

I also went and had a look at the negative feedback comments and other buyers mention fakes too - I just wish I had done that BEFORE I placed my order.

It may re-appear but if so, be careful what you order from them.

The moral for eBay buyers seems to be the old idiom: if sounds too good to be true then it probably isn't. (particularly if the price is way too low !)