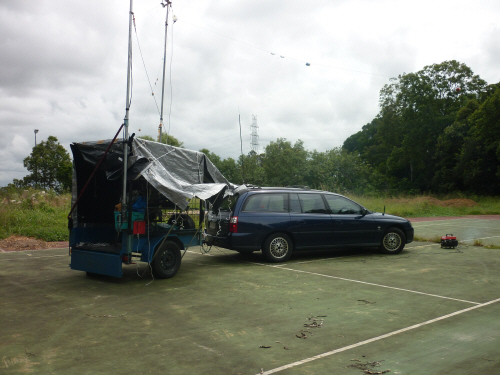 This was to be the first outing for the “newly revised” VK4ADC/P field day setup, this one with a difference : HF + VHF+ UHF  instead of the normal VHF + UHF + microwave. The last few years have shown up the shortcomings of setting up a temporary shelter of some sort, subject to the usually inclement weather that seems to accompany most recent field day events in Australia. The Summer VHF/UHF Field Day back in January was the first of the outings with the "first phase" of the change-in-concept setup but it then revealed a number of issues/shortcomings that have steadily been worked on ever since.

My FD setup is now based around a ‘converted’ 6’x4’ (i.e. 1.8m x 1.2m ) box trailer. The trailer now has a cage (of sorts) added, with a sloping top so that the top polytarp cover doesn’t fill with rainwater, with mesh sides so the wind doesn't allow the side tarp to move much and thus allow rain to blow inside etc.  There are two rotator mounts, one at passenger side front and the other at the driver’s side rear corner, a table top insert mounts across the inside and the radio gear itself is fixed into a removable “equipment box” which is held down by bolts (with wingnuts) through the table top. The battery box containing 2 x 12v car batteries is underneath, as well as the transport location for the petrol generator and plastic fuel container. The entire station can be created at home, external antennas excepted, and transported to the FD venue almost ready to use. The coax feeds to the various antennas are already connected through to the radio gear and left coiled ready to be extended to the feed points on the antennas. Likewise the 12V charging lead to the petrol generator is coiled and ready to be plugged into the ‘genny’ once on site.  That all makes for a rapid setup – and a rapid pull-down too. The setup took under an hour and for a single person operation to set up the VHF, UHF and HF antennas, that is really quite quick. Photos showing the actual arrangements are shown further down the page.

The only aspect that I hadn’t had a lot of time to confirm this time around was the computer function for logging. I had bought an EeePC 10.1” netbook via eBay only a week and a half beforehand but after loading VKCL3 and Omnirig etc onto it, I discovered that it did not always want to power up from cold each and every time (to be investigated further). That left me with a need to return to the old Compaq Armada 1700 that I had used in previous/earlier outings, noisy as it was and very hungry for power.  I did a quick modification to a PWM-based power inverter to get the required 15.5V output to suit the 14.4V battery pack voltage so that I could recharge it from the 12V battery bank. That was done on the Friday, the FD was the next day so I didn’t get a real opportunity to evaluate how it was going to work out. As it turned out, the battery power ran out about 2 hours and 43 contacts into the outing ( the PWM charger didn't work properly) so I was forced into ‘paper logging’ mode for the next 4 hours and 116 contacts ! The time detail for the log was as read from my homebrew PICAXE rotator controller running in GPS Read Mode with the actual serial GPS receiver mounted on the trailer’s drawbar. For info, it also showed the position info as 27°35.43S, 153°04.36E plus the grid as QG62mj.

My portable location this time around was in an adjacent suburb, Algester, some 600-700m away from the home QTH as the crow flies : minimal travel time but enough space to set up the HF antenna and a bit higher and with a better take-off to the south and west than from home. The station itself worked out well and the operating position was comfortable although I could have done without the torrential downpour lasting about ½ an hour that made it hard to hear the audio coming out of the radios (note to self : new headphones required for FD setup box).  Who knows what it sounded like at the other end! I looked out of the trailer at one stage to see about 20-25mm of water surrounding me – a virtual trailer island - and the petrol generator on the ground out in the open still continued to run and charge the battery bank throughout! The good thing was that I didn't get wet, and didn't have to make sure that the gear wasn't going to get wet either..

I had decided early in the planning phase that I would run the set of 3 turnstiles for 6M, 2M and 70cM in lieu of the normal set of yagis and mounted at the back of the trailer, the VHF/UHF whips from the front corner mount but would not run any frequencies above 439MHz FM, and would set up for 80M, 40M, 20M, 15M and 10M using the homebrew trapped inverted-V. My original plan was to use the 7M long telescopic fibreglass squid pole as the centre support but I discovered that it had too much bend to provide an acceptable height so made up a simple halyard arrangement with a pulley supported from the VHF/UHF whip mount instead. My previous-FD-used white PVC tubes and concrete-filled buckets were the end supports for the inverted-V and these were placed so that the maxima lobes were basically just west of a North-South line.  My original intention was to get on site fairly early so that I could check the tuning of each HF band segment but simply didn’t get a chance to do that. Instead, the LDG Z100 autotuner sorted out any SWR irregularities across HF. I must state that the lack of antenna gain (turnstile versus yagi) probably caused a lower contact count at VHF and UHF but, then again, the turnstiles did not have to be oriented into the correct direction like a yagi would have needed. It didn’t really matter what direction they were from - if I could hear a station then I could usually work them. The greatest distance worked at VHF was 288KM on 2M FM to VK2SRC portable. I could have also set up for 160M using a base-loaded whip but given the early finish time (0800Z), it was just going to be an extra antenna with minimal use contemplated.

The last QSO was at 0759Z (5:59PM) and I drove off at 6:36PM and, realistically, I would have been quicker if I hadn’t been holding an umbrella in one hand while I disassembled the antennas… It was still raining lightly when I pulled them down, stowed them and the mounting pipes coiled the coax feeders and drove off.

No hand tools are actually used in the erection or dismantling process.
All necessary 'nuts' have been replaced by wingnuts.
All coax connectors are either N-series or BNC.

The only thing actually on the ground is the generator - apart from the wheels on the car and trailer !!

Did I mention that the 'sides and top' are actually all bolted together so that it can actually be used as a standard box trailer when there aren't any field days due ....